RECOGNIZED BY NCOPA FOR “50” YEARS OF SERVICE TO PHARMACY 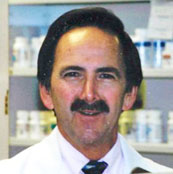 Jerry F. Gundrum, son of Warren and Florence Gundrum was born in Bucyrus, Ohio June 16, 1938.  His father was a tool and die maker for North Electric in Galion, Ohio and his mother was a homemaker.  He has a sister, Judy (Dickerson), a graduate of Ohio Northern University that lives in Bellville with her husband Raleigh, an ONU Engineering graduate.  Jerry grew up in Bucyrus and attended Bucyrus High School from 1952-1956.  After graduating, he began his college career at Ohio Northern University pursuing a 4-year Bachelor of Science Degree in Pharmacy, which he attained in 1960.

His very first job was a newspaper delivery boy for the Bucyrus Telegraph Forum for a total of 3 years.  He worked as a clerk apprentice for Clady’s Drug Store (Bucyrus, Ohio) from 1954 to 1961.  It was in 1961, that Jerry received a notice from the draft board, decided to enlist in the United States Air Force and was stationed at Lowery Air Force Base in Denver, Colorado.  Jerry did work part-time while in the Air Force for Hoffman Heights Pharmacy (Aurora, Colorado), L & K Pharmacy (Aurora, Colorado) and Republic Rexall Drug (Denver, Colorado).  He completed his term of service with the USAF in 1964.

Jerry married his high school sweetheart, Martha Sabo in 1962. They had 2 children, a son Jerry Jr., born in 1965 in Denver, Colorado and a daughter Kristi, born in 1968, also in Denver.  His son, Jerry Jr. is currently an electrical engineer for Grant Riverside Hospital in Columbus, Ohio and daughter Kristi is a marketing director for NSA Wound Management SVC, Independence, Ohio. Jerry and his wife Martha are also the proud to have 5 grandchildren (Jace, Gillian, Matt, Michael, and Daniel).

After leaving the USAF, he worked for Parkview GEM (Denver), Fan Fair (Katz Drug – Aurora, Colorado). F.W. Woolworth Company (Woolco) in Aurora – Colorado, Terre Haute, Indiana and DeKalb, Illinois.  In 1968, Jerry became a Staff Pharmacist for the SuperX Drugs in Mansfield and later Pharmacist-Manager in Galion, Mt Vernon, Mansfield’s Park Avenue and finally the Lexington Avenue store.  Jerry experienced the Revco and CVS buyouts retiring in 1994, after CVS bought Revco.  He then became Pharmacist-Manager of the Kroger store on Lexington Avenue in 1995, retiring the first time in 2003 and then again a second retirement in 2009.  Of course, as you know Jerry is still occasionally working part-time for Kroger.

Jerry recalls some unusual and frightening experiences in his pharmacy career.  He had 2 store break-ins through the roof at the Galion SuperX and an incident in which pharmacist Ed Mast was kidnapped leaving the store and then returned by the abductors for theft of control substances. It was later discovered the abductor was an employee’s brother and the employee later committed suicide.  Another disturbing incident occurred at the Lexington Avenue Mansfield SuperX in which pharmacist assistant manager Jim Williams shot an individual who was attempting to rob the store one Sunday afternoon.  The suspect was taken to the hospital and upon his release was in an accident by hitting a tree and was killed.

Mr. Gundrum has been an NCOPA member for nearly 40 years and served as President in the early 1980’s.  He has also been active in many other organizations including 38 years with the Lexington Kiwanis Club serving as president in 1981, 24 years with the Mansfield Shrine Club, serving as president in 1988 and 1989 and secretary from 1992 to the present, Boy Scout Troop 131 Advisor from 1980-1984.  He has been a Life Member of the Amvets, the American Legion, the Moose Lodge as well as an associate member of the Mansfield Liederkrantz, Knights of Columbus in Mansfield, Bucyrus Masonic Lodge, Al Koran Shriners of Cleveland, Baku Grotto and the MG Car Club.

Jerry’s hobbies include the restoring of a 1951 MG TD, a 1987 Chevrolet El Camino and participating in numerous area parades with the miniature Shrine pick-up trucks.  Jerry and his wife, Martha have enjoyed their vacations spots in Hilton Head, South Carolina and the sandy white beaches of Mexico’s Riviera Maya, located on the coast of the Yucatan peninsula.

At the approaching age of 72 and having obtained his pharmacy degree in 1960, this upcoming summer Jerry will attain the outstanding privilege of being an active Ohio State Registered Pharmacist for a total of 50 years, a half-century.  This is a rare accomplishment and your fellow professionals are proud to recognize this outstanding achievement and congratulate you for your years of service to the profession of pharmacy.  We extended our best wishes to you for continued good health and enjoyment in whatever future endeavor you choose.